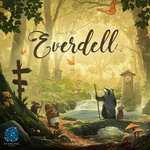 Castles of Tuscany, The

Marvel Champions: The Galaxy's Most Wanted

Battle of the Five Armies, The (Revised Edition)